For a beach lover, the beaches of Fort Myers and Sanibel are a dream destination. 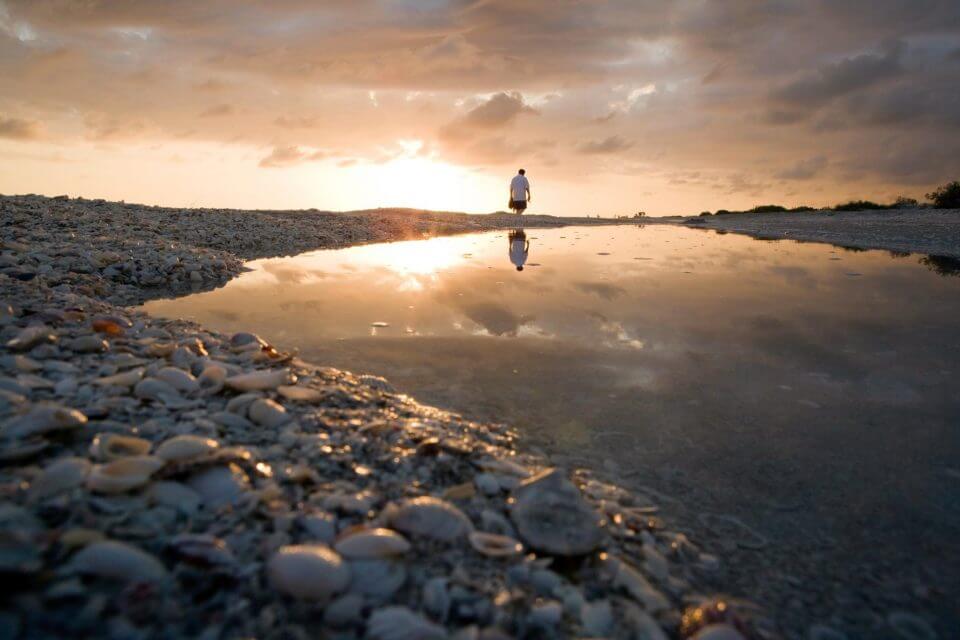 Trouble in paradise: I’m at the tollbooth on the causeway that crosses to Sanibel Island from Fort Myers, Florida. There’s a six-dollar charge, and they don’t take credit cards. After fumbling through pockets, purse, and beach bag, I come up with only four crumpled one-dollar bills. But the tan booth attendant offers an authentic smile. “If you don’t have it, it’s OK,” she says, waving me through. “Someone ahead of you just paid it forward.”

Receiving a favor from a stranger is an unexpected welcome to the islands west of Fort Myers. But it’s just one of many things that make the area unusual.

The barrier islands are off of the mainland and have wide inlets from the Gulf of Mexico that are fed by several rivers. The largest, the Caloosahatchee River, provided transportation far inland for the Calusa people long before the Spanish explorers came, and it’s still popular for boaters. But these days most travelers arrive in Fort Myers via Interstate 75 or at Southwest Florida International Airport, drawn by the beaches, wildlife, and—especially—shells. 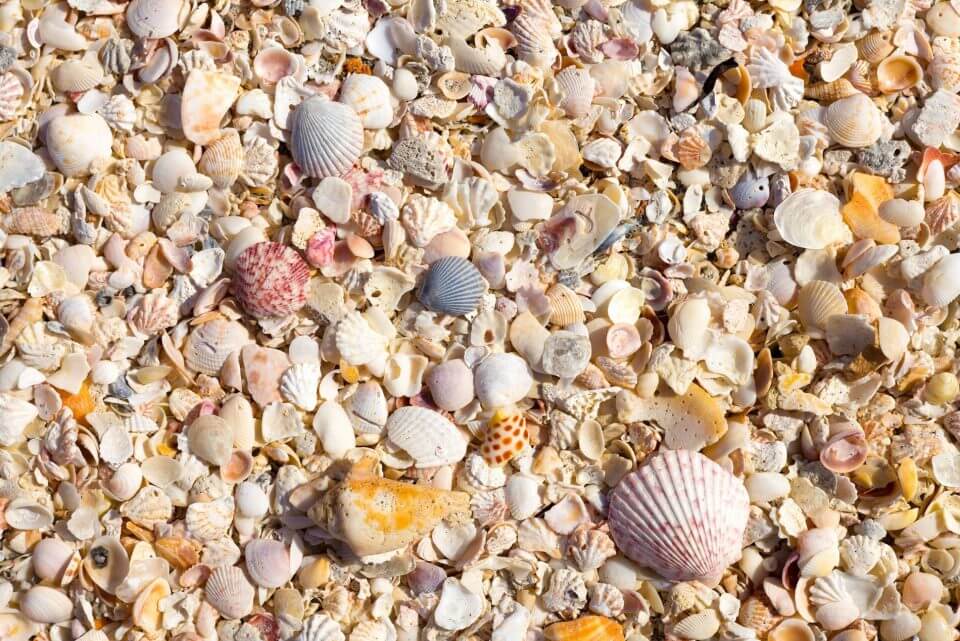 The beaches of Captiva Island, Florida, are known for their wide array of seashells that come in all shapes and sizes. PHOTOGRAPH BY TIM GRAHAM, GETTY IMAGES 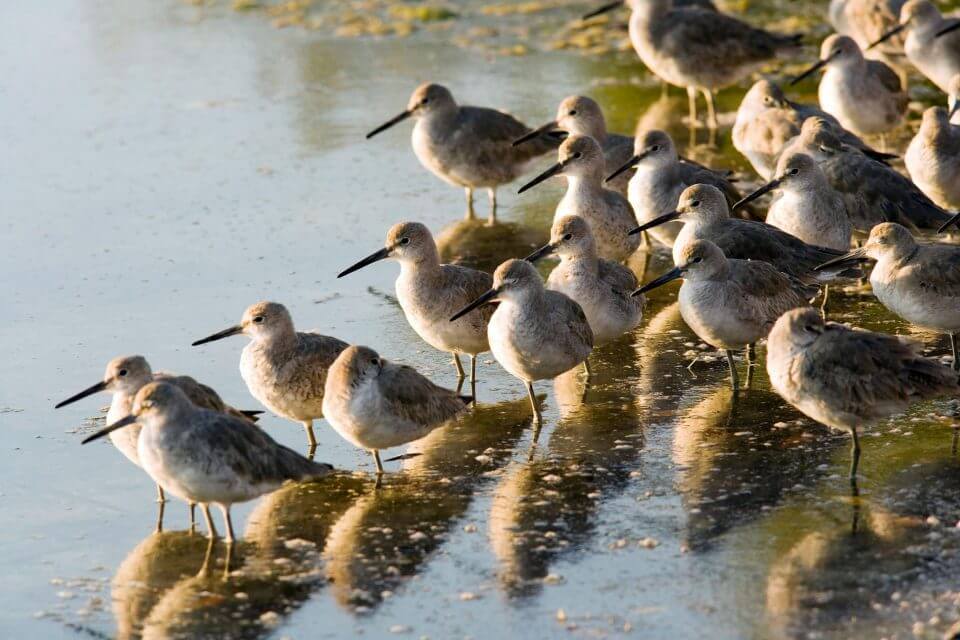 Dozens of islands (including keys and tiny clumps of mangroves) lie off the west coast of Fort Myers, most accessible only by boat. Useppa Island and Cabbage Key are two privately owned, car-free islands close to each other and similar in size, but with completely different personalities.

Useppa is inhabited solely by members of an exclusive club, so nonmembers must be invited by a club member to enjoy lunch at Collier Inn or stay overnight. Day-trippers can, however, enjoy the tiny but information-packed Barbara Sumwalt Museum, where a five-dollar donation admits you to 10,000 years of history.

Only a few minutes by boat away, but in another realm of existence, is Cabbage Key. Owned by the Wells family, Cabbage has public docks, affordable accommodations, and many fans. Jimmy Buffett may not have written “Cheeseburger in Paradise” about Cabbage Key’s inn, but he did eat there, and rumors abound. Dollar bills abound, too: Thousands are signed and taped individually to the walls and ceiling, where they flutter in the breeze until they fall down and are collected for charity. John F. Kennedy, Jr., autographed a dollar, as did Secretary of the Treasury James A. Baker, who signed the bill in ink just above his printed signature.

In 1921, a hurricane swept across what was then Captiva Island, forming a brand-new island, North Captiva. Because it’s reachable only by boat or private air, make sure to bring your own everything. In 2004, another massive storm, Hurricane Charley, swept through, creating another new pass through North Captiva, but that one closed up again in a few years. 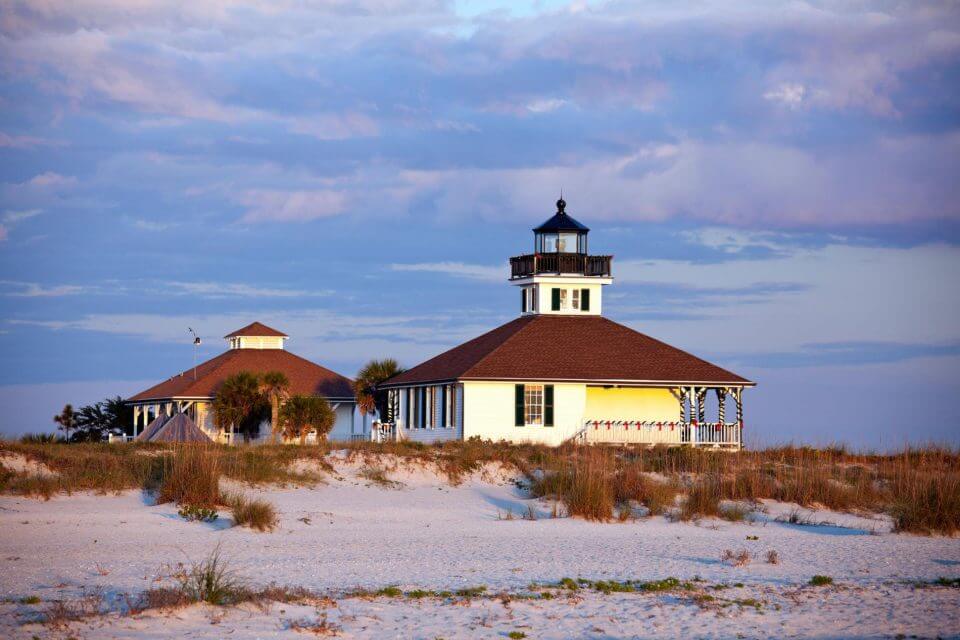 Unlike most of Florida’s barrier islands, Sanibel runs east-west instead of north-south, catching the currents from both the north and south. Its coastline does not have an underwater shelf where seashells can get stuck; in fact, there’s a gradual shoreward incline that acts like a ramp. Due to the unusual geography, shells wash up on its beaches in multitudes. Sanibel has shoals of shells, especially after a high tide or a storm. The seashell capital attracts seekers from around the world, some of whom emerge before dawn with flashlights, doing the “Sanibel stoop” as they search for—and find—whole, rare, and colorful examples of more than 300 specimens.

Bailey-Matthews National Shell Museum offers even more shell stuff, including hands-on learning tanks and environmental education. “If you want to save the whales, you’ve got to save the snails,” says executive director Dorrie Hipschman. Watch the mollusks living their quiet, watery lives, admire the sailors’ valentines, and take a “shellfie” with some of the biggest shells on record.

No one is more excited about shelling than Pam Rambo, who gives beach walks, talks, and shells to anyone who shares her interest. She lives on Sanibel, where she’s routinely stopped by fans and asked for daily beach updates and tips, as well as photographs. Recently Rambo designed the shell-bedecked “Shell Love Bug,” a Volkswagen encrusted with over 20,000 locally found shells. It looks like a rotund, rolling wedding cake: a “shellabration” of a lifelong passion. 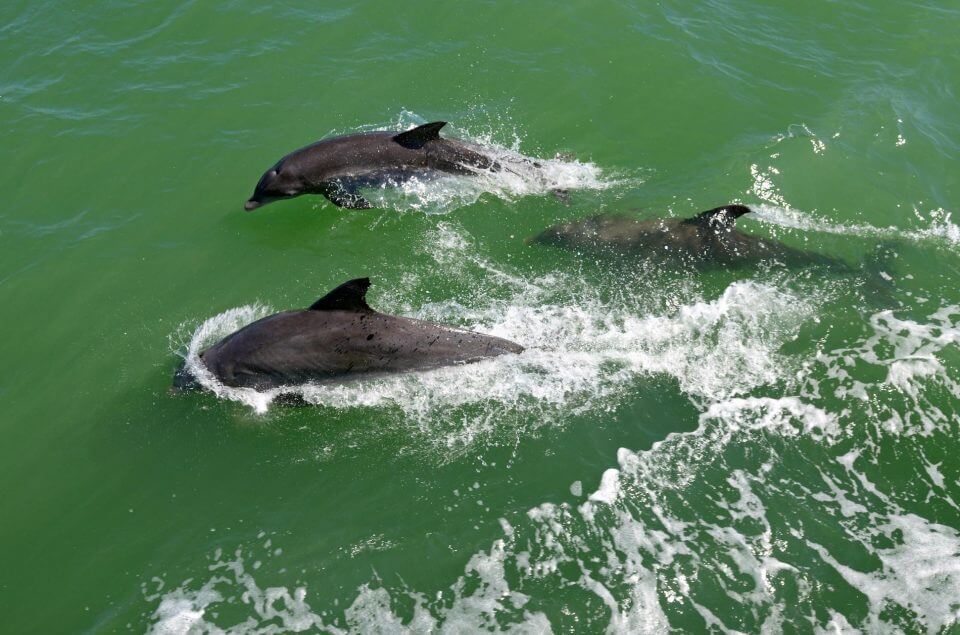 Three dolphins swim by a boat off of Captiva Island, Florida. PHOTOGRAPH BY NORBERT EISELE-HEIN, IMAGEBROKER/ALAMY

Almost the whole island of Cayo Costa is a Florida state park. Its 2,426 acres offers biking and hiking trails as well as a dock, camping facilities, and nine miles of undeveloped beach. Though it’s just a few miles from busy Captiva Island, this island gets far fewer visitors because it’s accessible only by boat. Captiva Cruises offers narrated trips to the park, providing great information and local lore. Bring your own food, water, and shade.

Set between the mainland and the barriers, Pine Island is one of Florida’s largest islands. Because its shoreline has more mangrove tangles than sandy beaches, Pine has remained relatively free of resorts, development, and overcrowding.

Since the time of the Calusa people, Pine has been used for fishing. Walk the Calusa Heritage Trail to learn how and why the ancient people dug miles of canals and built huge shell mounds, indicative of a complex, sophisticated society.

Across the road is modern sophistication: Tarpon Lodge, a renovated 1926 house owned by a second-generation local. Its restaurant offers seasonal local fish, such as tripletail, hogfish, and black grouper, mostly caught with hook and line, often the night before.

Two-thirds of Sanibel Island is protected land, including the 6,400-acre J.N. “Ding” Darling National Wildlife Refuge. Some 245 bird species live there, and visitors are encouraged to seek the “big five,” including white pelicans and roseate spoonbills (such a bright pink that they’re sometimes mistaken for flamingos). Endangered or threatened species in the refuge include smalltooth sawfish, loggerhead sea turtles, and wood storks. 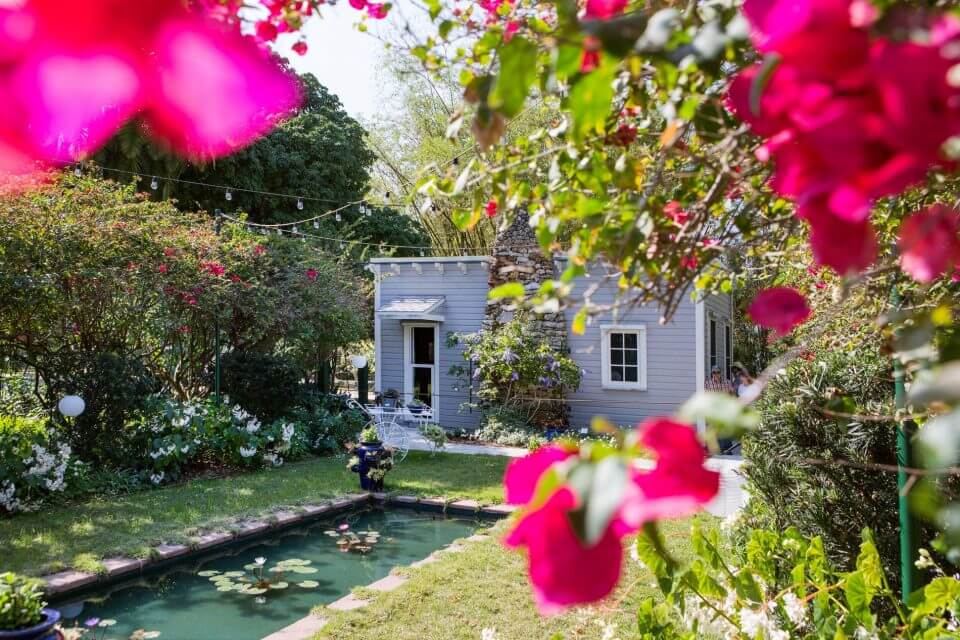 The Edison study is photographed through flowers in the Moonlight Garden in The Edison and Ford Winter Estate in Fort Myers, Florida. PHOTOGRAPH BY JÖRG MODROW, LAIF/REDUX

Thomas Edison and Henry Ford were friends and part-year neighbors in Fort Myers. The Edison and Ford Winter Estates is a sprawling museum complex including the families’ winter homes, a laboratory, and huge tropical gardens with flourishing fruit trees—beware of falling mangoes!

Car aficionados will appreciate the specialized 1918 Model T Truck that the inventors used on camping trips, traveling over rugged terrain cross-country. The chuck wagon included snug storage for cots, linens, and cooking gear. The luxury RV of its day, it allowed them to explore the wilderness in relative comfort.

Attracted by plentiful fish and freshwater, people have been visiting and living around the area that is now the Pine Island Sound since about the end of the last ice age. Visitors today can imagine what the area might have looked like thousands of years ago. Pre-Columbian era relics of the native people include spearpoints, jewelry, and those impressive, mysterious shell mounds. Take a kayak trip or walk down a deserted beach to get out of sight of buildings, and you’ll experience the area much as ancient people did. 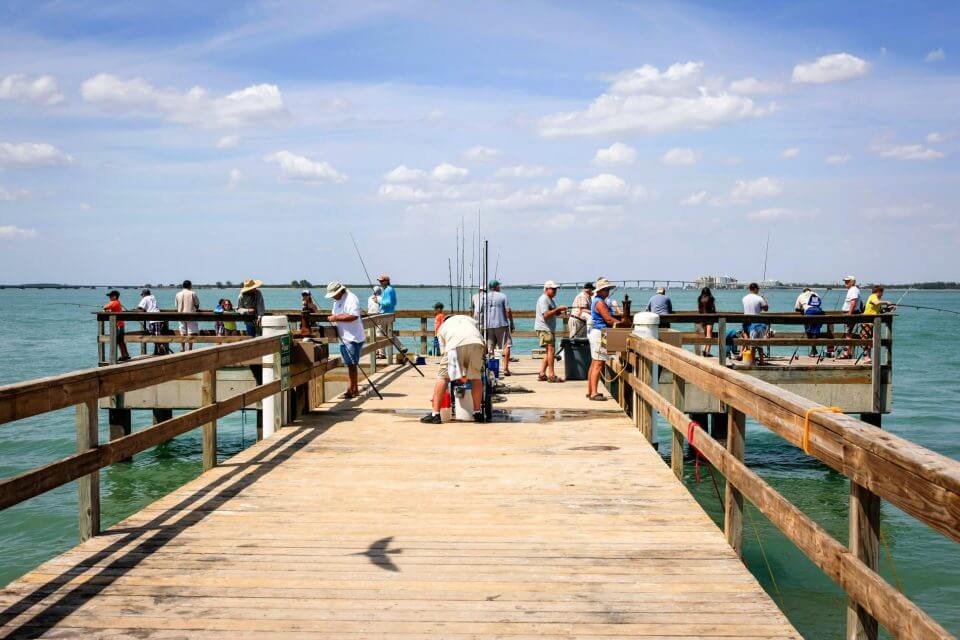 Fishing is a popular pastime on Sanibel Island. Here, crowds fish from a pier. PHOTOGRAPH BY IMAGES-USA/ALAMY

Every human culture here has relied on fishing. In the 1700s, Cuban fishermen worked with the Creek Native Americans, shipping salted fish back to Spain. In the 1800s, a central fishery on Useppa comprised some 15 buildings. Once the railroad came to Punta Gorda, the locals could sell vast quantities of seafood to be packed in ice and transported up the East Coast in a matter of days.

As recently as a century ago, fishing families used to work and stay in offshore, stilted fish cabins surrounded by shallow water. With wooden walls and metal roofs, many of the shacks have disappeared with time, and a few burnt down, but a handful remain standing. Listed on the National Register of Historic Places, they are often photographed and occasionally used for their intended purpose.

This article, titled “10 Reasons to Visit Fort Myers and Sanibel, Florida” was originally published on August 10, 2016 and appears on NationalGeographic.com

Book Your Stay With Us Today

Give Us A Call

Our staff is standing by to help you book your stay and answer any questions you may have about your relaxing island getaway. (239) 283-2278